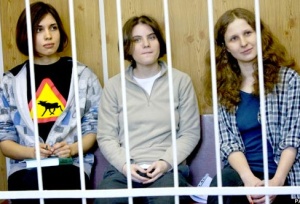 Protest rockers Pussy Riot will be sentenced on August 17 for the now famous “punk rock prayer” heard around the world. Peaches and a host of other supporters have released a track in support of the band.  Fingers crossed.

Check out Free Pussy Riot and don’t forget to sign the petition supporting the band’s release from a Russian prison.

One thought on “Peaches & Others Release #FreePussyRiot Track”