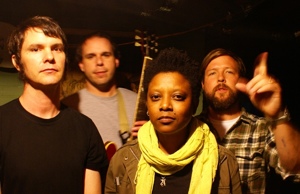 Donkey Jaw: To paraphrase, you’ve said that until now you haven’t written about sex, love, and the flux of change because you’re country, raised Christian, and queer. What lit the fire to start now at age 40?

Shirlette Ammons: Well, I’m not yet 40. I’m approaching 40. I guess I’m just way more comfortable in my multiple skins, something that has come with age, thought, understanding, questioning and experiencing. I feel as if things that once had me in emotional turmoil are now settled within me because I accept them as my experiences and I’m unapologetic about each of them.

Out artists like Mykki Blanco within the NYC hip-hop community have gotten a bit of attention lately, not for their craft but their sexuality. What has your experience been like outside the bubble of a big city?

First, it’s difficult to understand how anyone can listen to Mykki Blanco and not recognize the magnitude of skills flexed, no matter if they take note of Mykki’s sexual identity, even highlight it. But I always feel that people who are turned on or off by an artist because of their sexual identity (or whatever identity, for that matter) is the one who loses out, not the artist.

I’d like to think my craft is the reason anyone explores my work, but within the idea of craft are so many layers. Sometimes people latch on to your work because they can identify with your experience. So, to be able to share your experience in a way that other people feel resonance with, is just as much a tool of craft as is being lyrically astute.

A place the size of Durham definitely has its own bubble, just as a big city might. And there are certainly benefits and drawbacks to that. The good thing is the network of musicians and artists here who are contributing to a ‘renaissance’ of sorts that I’m really proud to be apart of. The visual art scene is vibrant as well as music and theatre. I guess the best part of ‘the bubble’ is that our contribution is so tangible. We can easily reach out to artists across genres and challenge our own bounds. The accessibility we have to each other is really cool. The challenge of ‘the bubble’ is that it can be localizing if you’re not constantly pursuing efforts to expand your audience and your voice.

What can people expect from your debut solo album, Twilight for Gladys Bentley (T4GB)?

Well, I hope people hear in Twilight an effort to merge various types of prowess as inspired by Gladys Bentley. I hope people hear music that encourages them to access their own renegade spirit, explore their “Bentley Mode,” if you will. I hope people hear an effort to revive the memory of Bentley using the tools of music and sexuality, tools that made her a brash ambassador of both. They can expect some really layered music, too. All of the producers have their own style but are similar in the way they stack on these intricate effects that keep emerging the more you listen. I’m really happy to have worked with Bueller Tout nou out of Quebec, AppleJuice Kid from Chapel Hill, NC, and Max Bedroom based in Atlanta. Max mixed and mastered the album and really spent intimate time developing a signature sound for this project.

How did you discover the story of Gladys Bentley and what prompted you to build a record around this dynamic lady?

I can’t exactly recall how I came across Bentley’s story, I just know that it has resonated with me for a long time. I have been thinking about hip hop as the current music of lyrical and sexual prowess. I then aimed to tie that into the way Gladys Bentley used the popular genre of her day which was the blues, to display her ‘swag,’ taking lyrics to popular songs, reworking them to make them raunchy. I also thought about the fact that she would walk down the streets of Harlem in the 1920s, ‘dressed like a man,’ quite comfortable in her self. Fast forward to the 1950s, the McCarthy Era, and she began ‘dressing like a woman’ because she was afraid of being blacklisted. The politics of oppression and suppression.

I wanted to imagine a present-day Bentley, because I realize the privilege I wear, particularly as a queer musician, as a result of the risks Bentley (and many others like her) took. I usually walk on stage feeling pretty good about myself. To some degree, it’s way less risky to exhibit ‘butch swag’ on stage now that it was then. However, in some ways, it’s more difficult to present music that asserts prowess yet is not misogynistic. So, I welcome that challenge and anticipate an audience that will hold me to that measure while also challenging themselves toward sexual autonomy as they engage the music. All that to say, Gladys Bentley definitely set the stage for me to present this particular voice in this moment.

What are your thoughts on opening for The Roots at Hopscotch?

As a child of 90s hip hop, I can’t accurately express how excited and honored I am to have the opportunity to open for The Roots with my homies, The Dynamite Brothers. We’ve had a great time playing together since our record was released a little over a year ago, and we’ve grown as a collective over the course of playing the music live. It truly is an honor. Black Thought is one of the most dynamic emcees ever. QuestLove is THE hip hop drummer. I know so many cats who have tried to develop their sound in his tradition. We are excited, our butterflies are aflutter, and we can’t wait to share our music with the Hopscotch audience. It should be a good time.

Shirlette & The Dynamite Brothers play with Escort and The Roots on Saturday, Sept. 8 to close out Hopscotch.