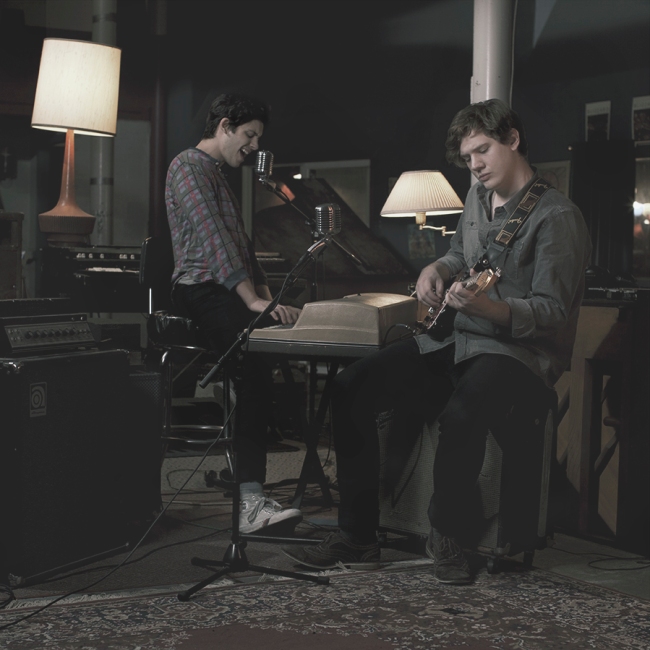 Typically, conference calls are reserved for all sorts of business-like matters that rarely involve talk of new music and such creative things. Liam Benzvi and Francis Jimenez, known as the duo Strange Names, prefer to do interviews this way and we happily obliged to get the scoop on their latest 7″, Minor Times/Once an Ocean (White Iris Records). No PowerPoint slides were reviewed in the making of this interview, but we promise all the relevant details were discussed with the Minneapolis duo.

Donkey Jaw: Talk to me about working in the creative incubator that is Black Iris studios and releasing a record on the label arm, White Iris?

Liam: Absolutely. It was great.  When we walked in people were rehearsing because in addition to being a rehearsal space, it’s also a studio.  Super laid back. They had a lot of state of the art, vintage equipment that we got to play around with which was the coolest.

Francis: They’re just a really chill team that’s fun to work for and people that you don’t mind to hang around with or work too hard for.

For the 7”, did you guys have a handful of songs you’d been working on that you brought to the studio or was it locked down to the two we hear on it?

Liam:  We had a bunch of tracks we were down to record and sent them to White Iris.  They chose these two that they wanted to do and of course, we were agreeable.  We were very interested in the songs taking on a different shape given all of the equipment they have and tried to use what we could from that library of instruments.

Francis:  It was really different recording this time around.  Usually, we build some kind of electronic drum track to play with and this time we recorded drums and bass live to tape.  The songs sound less electronic than they did on our second EP.  It’s a cool new direction because it sounds more like we do when we play live.

Did you guys enjoy your time out in Los Angeles?  Any mayhem?

Liam: I grew up in Brooklyn and don’t even really have a driver’s license, so I appreciate a walking city.  Echo Park and Silver Lake are good walkable walks of LA, so that was welcoming.  The only time we did anything like Hollywood Boulevard was cruising through it quickly at night.

Francis:  We had to see that.  (laughter)

Liam:  We didn’t get to immerse ourselves in the superficial cliche of it all.  All the people we encountered were lovely.  We were there for four or five days and in the studio most of the time.  We wanted to go to the beach, but that never happened.

You guys met and started playing music in Minneapolis.  What’s the scene like there, if one exists at all?

Francis:  It’s really easy to get noticed and make your mark, because there’s just not a ton of bands. That said, it’s a really lively and supportive music scene.  It’s not overwhelming and more like a small family all competing for the same thing.  Being from Minneapolis, you don’t really have that much cred (laughter). It’s really a great place to be a musician with so much support.

Are you guys still living many miles apart?

Liam:  Only for a few more weeks.  I’m actually moving back to Minneapolis so we can work on our full length for an extended, infinite period of time.  It’s a one way ticket, so we’re finally going to devote all of our creative energy to a full length now that we’ve done this.  I think we’re in a good place to do it.

What can we expect directionally with the full length?

Francis:  I guess we’re not quite sure.  We definitely have enough songs right now for a full length, but we’re writing new stuff. Each new song is kind of in the same vein, but at the same time branching into new territory which is really cool.  We’re really excited about that.

LIam:  I think it’s going to be about finding cohesion with all of the songs.  I feel like we’re very rhythmically and melodically centered when we write.  That’s really vague isn’t it?  You could say that about all songwriting (laughter).  When we can get in a rehearsal space and flesh out ideas in the moment, that’ll be really valuable.  I’m looking forward to the discoveries.

Francis: Playing live will find that cohesion.  A lot of the singles we make are garage rock and synth pop, which don’t necessarily blend together but when we play them live they do.

Will you guys be touring in the coming months or focusing solely on the upcoming album?

Liam: We’ll play some shows locally.  We love playing live and hope to do that while we’re writing and recording.  That will help us understand what gets people riled up and what doesn’t.  Honestly, we recorded a lot of our EPs before we had played those songs live.  What all bands need is some time to get out and play all of their songs live.

Do you guys flesh out your sound at all on stage with other players?

Francis:  We started out rehearsing with just us and moved to five members.  That was too much.  We finally got it down to four.

Liam:  We’ve always firmly believed that our live set always has to be interactive and dynamic. It’s just more dynamic watching a full band play, so the full band serves us in that respect.  One of my favorite bands to see live is Blonde Redhead because of the collaborative energy they have.  The whole audience feels some kind of kinetic vibe.  It’s almost like a chemical reaction.  I hope we can bring that to our shows.

Speaking of sound, you guys are described in all kinds of ways.  Everything from synth pop punk to garage rock gets mentioned.  What’s the worst and or weirdest way you’ve heard your sound described?

Liam:  Well, being compared to other bands is always kind of weird because that creates a pretense, but it’s how some people find music accessible.  We were recently compared to Vampire Weekend, and not to knock them but we were just like trying to do our own thing. It’s really all over the map.  We try to simplify it into just pop music, but people don’t always know what that really means.  To me, the epitome of pop is Rock The Casbah. So really, you just want to create that song over and over again (laughter).

What show are you most excited to see this summer?

Liam:  I don’t know who is coming to Minneapolis.  We’re going to be playing with The Walkmen.  That’ll be fun.

That last record was killer.

We’re all about recommendations at Donkey Jaw.  What record would you suggest our readers check out?

Liam: We played with Caveman a few weeks ago and then saw them at SXSW.  That record is really stellar. The new Knife album is crazy cool too.

One thought on “Wax Poetic: An Interview With Strange Names”