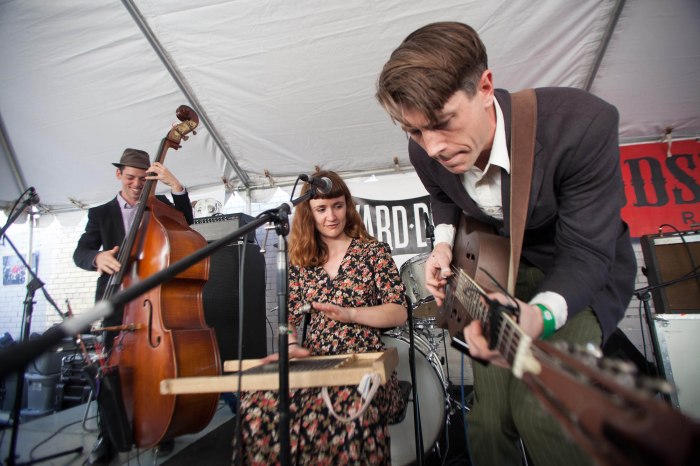 Luke Winslow-King doesn’t claim to be an expert about his now beloved home of New Orleans.  You don’t so that sort of thing unless you’re born and raised, folks.  Rather, like many aspiring musicians he followed the roots of his favorite tunes back to their  source and simply fell in love.  With rich traditions and an abundance of good folks and food, the spirit of the Crescent City quickly gets in your blood and doesn’t ever quite let go. If I had to guess, Cadillac, Michigan won’t see its native son again, save for a quick stopover on a tour or some such business.  King’s Bloodshot Records debut The Coming Tide is a colorful homage to a bygone golden musical era that leans on mastery of old time picking and washboard scratching.  That said, the multi-instrumentalist and top-notch band never feel derivative.  They manage to infuse their blend of traditional and original material with unique arrangements and all the fervor of a second line parade.  Delta blues, folk, jazz, and a smidgen o’ gospel.  It’s all there and worth a close listen.

Luke Winslow-King: We used to busk outside Rose Nicaud Cafe on Frenchmen Street.We’d pack 10 or 12 musicians into this tiny little store front entrance. The response from the audience was great, we’d draw a nice crowd, and everybody was having a good time; literally dancing in the street. It was very loose and free then. We’d take turns picking tunes as there was no clear leader of the band, or band name for that matter. It felt like no one had any other aspirations other than to have a good time, become a better player, and go home with a pocket full of $1’s.

What’s the best and worst part about being a musician in New Orleans?

I’ve been told there is a worst part, but I guess I haven’t discovered it yet. The best is that when you come home off of tour there is an eager and interested audience hungry for music. We stay really busy down there playing all kinds of great gigs. The weather and the traditions are amazing, but the great friendships I’ve fostered down there really make it the best place for me.

You are a child of the 80s. How’d you get interested in old time music?

I kind of traced it back through the years. I was into music of the 60’s and 70’s growing up. Then got into blues, jazz, and classical though high school and college. I finally found my sound when I moved to New Orleans discovered traditional jazz and roots blues over the last decade. I love that roots music can be improvised while still being accessible peoples music.

Do you find that being associated with such a distinctive musical town raises the bar when you tour as far as what folks expect to see and hear?

Yes, it definitely raises the bar as far as what people expect. That is often good because it drives people to the shows.  People never seem to mind that we play originals and deep cuts rather than When the Saints Go Marching In or What a Wonderful World. We feel a certain responsibility to be authentic and to represent New Orleans well without claiming to be authorities.

I’ve read you are a fan of Blind Willie Johnson.  What do you think of Jack White’s recent effort to reissue of some of his work via Third Man Records?

You open The Coming Tide with a bit of call-and-response.  Does that amp folks up when played live given the chance to engage?

For sure, we work really hard to engage every audience member at our shows.
The call and response texture does do a lot to involve the crowd. We do all we can to make them feel like they are taking part in a one time experience. We take a lot of liberties on stage to try to give the songs room to change and evolve over time.

Did working as a music therapist impact the way you now write and play music?

I think so, it gave me insight into how we process and use sound and music as people. Having a better understanding of that helps me to write songs that can be more direct and effective. It also gave me a lot of chances to see how a piece of music can correlate with a really specific emotions.

Generally speaking, what’s your favorite off the beaten track spot in New Orleans?

I love to see King James and the Special Men at Bj’s in the Bywater on Monday nights.

Luke Winslow-King and his fine band are touring throughout the month.  Check out dates here and get thee to a show, y’all!