It’s a good thing we really dig Scott H. Biram because that surly-as-possum-piss fucker can’t be stopped.  Seriously, the guy was hit head on by an 18-wheeler and went on to play Austin’s famed Continental Club just weeks later with various broken parts and an IV still in his arm.  Call it a life lived pedal to the floor and grinning, one that fuels songs as authentic as the dirt beneath your soles.

You could call Biram’s sound everything from cowpunk to kitchen sink blues and still miss the mark a bit because he sonically squirms around like a rowdy little puppy that can’t wait to get loose from a tight grip and raise holy hell. One thing that’s consistent across everything he does is an unwavering, if not insane, passion for playing music for folks. 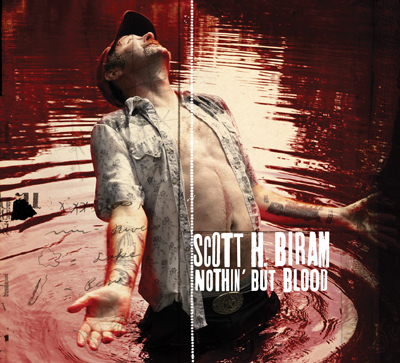 On his forthcoming album, Nothin’ But Blood out February 4 courtesy of Bloodshot Records, Biram’s whiskey-fuel fire rages on consuming us with well-penned tales of sin, redemption and a little bit of stompin’ hallelujah like a backwoods Dylan. Hell bent dirty riffs often give way to swaying strums where we see Biram flex is country-blues strongarm.  But, fear not he doesn’t stay down for long. He never really does. As he shouts on Only Whiskey! “I’ll be the one who says when I’ve had enough.”

The wild man rambles on through the Spring alongside Whiskey Shivers and Larry & His Flask on select dates. You can check out dates here.